Nathaniel Woods was recently put to death by the state of Alabama. He was convicted of being involved in the cold blooded murder of three Birmingham police officers.

The proof showed that the officers went to his apartment to arrest him on drug charges. Woods duped the officers into coming inside the apartment and Wood’s partner, Kerry Spencer, opened fire with his deadly weapon killing the three and wounding a fourth officer.

The other murderer, Kerry Spencer, took credit for doing all the shooting. He says Woods is innocent. Spencer is awaiting execution. Let’s see. We have a convicted cop killer saying his partner is not guilty. Sorry, but Mr. Spencer doesn’t carry much credibility.

Some people voiced their opinion that Woods should not be executed, even going so far as saying the state would be killing an innocent man. I wonder how much of the trial those people actually saw or heard.

Alabama law is very clear. If you are involved in the murder of a law enforcement officer, you qualify for the death penalty. That is the law. Period.

It is absolutely absurd to think Woods did not know his partner was going to shoot these brave officers. It was premeditated, planned, cowardly murder. It is that simple.

A jury of 12 people who were questioned by lawyers on both sides as well as a judge were picked to serve on the jury because it was felt they would be fair and impartial in making their decision. They heard every bit of the proof from both the prosecution and the defense and arrived at the decision that Woods was guilty of the crime.

The case was reviewed on appeal NINE times and eventually was heard by the United States Supreme Court. As a matter of fact, the execution was delayed for 3 hours for the Supreme Court to take one more look at it. No one in the entire appeals process saw any kind of reversible error.

Alabama’s Governor took time to review the case herself before proceeding with the execution.

Woods and Spencer were given every consideration the law allows to make sure they had been fairly and rightfully convicted.

In contrast, the murderous pair saw fit to appoint themselves to be judge, jury, and executioners of officers Carlos Owen, Harley Chisholm III, and Charles Bennett . Our prayers should be with the families of these fallen heroes.

The author, Jimmie Leach is a former Director of Criminal Investigations for the Tennessee Highway Patrol. His first book, “You Can Tell ME, effective interviewing made simple” may be found on Amazon.com 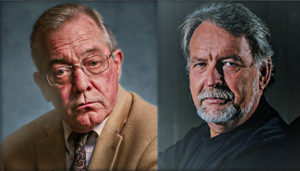